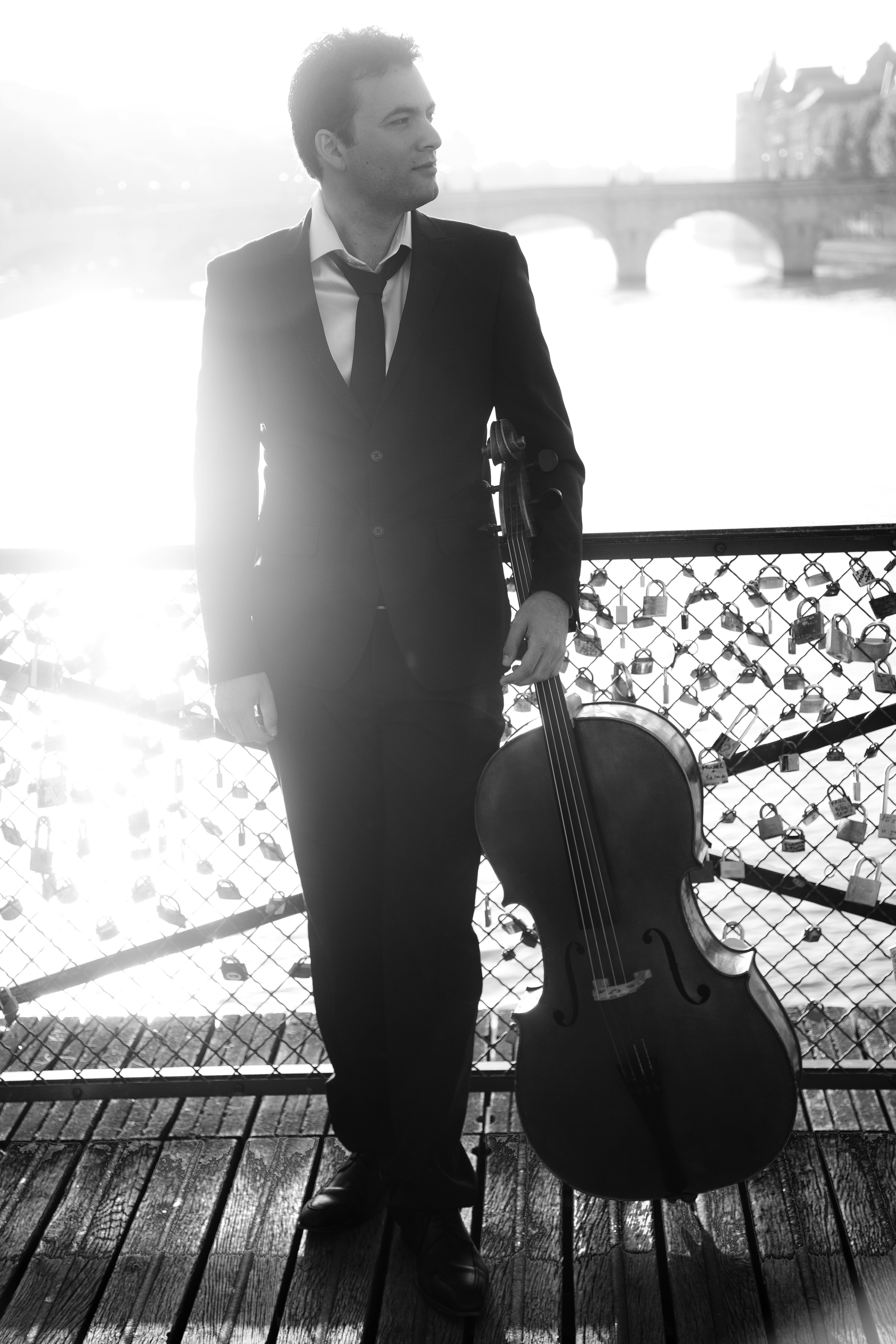 The French concert cellist Sébastien Hurtaud was born in La Rochelle, France. Influenced by his family consisting of artists and skippers, the focus of Sébastien’s career has been on classical music and traveling around the world to discover new cultures and new composers, and to imbuing his interpretation of cello works from past centuries with this knowledge and experiences.

His new album dedicated to Elgar and Gareth Farr concertos with UK Rubicon Classics mirrors his artistic musical journey and has been recorded under the direction of Australian conductor Benjamin Northey and the New Zealand Symphony Orchestra. After numerous radio and press magazine appearances in France, UK, New Zealand, RTVE, USA Luxembourg, Sebastien has received many rave reviews with 5 stars in BBC Magazine, 5 stars in Musical opinion to name a few. The famous French critic Jean-Charles Hoffelé writes:

Sébastien Hurtaud grasps the work with a full bow, as André Navarra once did, a great sound that says as much as it sings. The admirable sound, ample, deep, will seek with his playing that suspends time before the flight of the Allegro molto, an embracing eloquence[…]

Laureate and winner of the International Aldo Parisot Cello Competition in Korea and the Naumburg Foundation Cello Competition in New York, he is the first French cellist to win the Adam International Cello Competition in Christchurch, New Zealand. The Adam Competition was established by Alexander Ivashkin and had as a patron, the legendary Mstislav Rostropovich. Conductors and presenters have praise Hurtaud’s lyric, sensitive and powerful playing. His performances are frequently broadcast by radio stations in countries including, France, Canada, USA, Mexico, Colombia, Ecuador and Panama.

The international press has lauded his expressive performances. Forbes, Fanfare disc magazine, Strad Magazine, the New-Zealand Herald tribune and other publications describe his performances as "overwhelming, creative, dynamic and dramatic (...). The soul of a Rostropovich and the virtuosity of a Feuerman (…)”.

During the 2019-2020 season, Hurtaud performed the Offenbach cello concerto at the Ploemel and Redon Festivals in France with the National Orchestra of Bretagne conducted by Sergio Alapont. He also performed the Elgar cello concerto during a USA concert tour dedicated to 100th anniversary of this piece, with conductors Darwin Aquino and Daniel Rieppel.

Sébastien was invited by France Inter, France's most popular radio station, to a broadcast of the program “Le Grand Atelier”, which included guests like acclaimed film director Bertrand Tavernier. Sébastien performed the world premiere of “The Dawn of Hope” composed by Jose Elizondo.

Sébastien has performed the Elgar cello concerto in multiple occasions, including a concert at the Wellington Michal Fowler Center with the New Zealand National Orchestra, under the direction of Benjamen Northey, and a concert at the Anita Vilaz Theater in Panama during the “Alfredo de St Malo Festival”.

At a concert at the cathedral of the historic site of Les Invalides in Paris, he performed Gareth Farr’s cello concerto and Massenet’s Elegie with the French Republican Guard Orchestra conducted jointly by François Boulanger and Daniel Linton-France

Sébastien had the honor of being invited 10 times by the Philharmonie des Deux Mondes Orchestra to perform, in a French tour, Offenbach’s virtuosic cello concerto, conducted by Philippe Hui. Sébastien debut performance in Poland featured him playing “Don Quichotte” by Richard Strauss with the Picardie and Silesian Symphony Orchestra, under the direction of Arie Van Beek. His debut in Rome took place at the Mexican Cultural Institute.

Hurtaud’s vast concert repertoire includes European, Russian, North and South American music. Sébastien was influenced by French composer, Claude Bolling, with whom he played the cross-over suite for cello and jazz trio. Sébastien is interested in a variety of styles and does not hesitate to play Classical music with jazz influences, like Kapustin’s second cello concerto, the cello suite and jazz trio by Claude Bolling and the concerto by Friedrich Gulda for wind orchestra and cello. He played the latter with the Slovak Philharmonic Orchestra, under the direction of Leos Swarovski. As a strong advocate of “new music”, he has commissioned or performed new music by international composers, such as Lucas Debargues, Youli Galperine, Jonathan Grimbert-Barré, Thomas Schwan, José Elizondo, Grégoire Igert and others.

In 2017, Sébastien commissioned New Zealand composer Gareth Farr to write the concerto “Chemin des Dames” and received the support of the “Label du Centenaire” from the French government, “Creative New Zealand”, the Adam Foundation and the James Wallace Foundation. He performed the world premiere in two cities in New Zealand, Wellington and Auckland. The European premiere took place at the Laon Festival with the Metz National Orchestra, under the baton of Jacques Mercier. In 2018, Sébastien was invited by the Army Museum of the Invalides Cathedral in Paris to perform at a ceremony to celebrate the centenary of the Armistice that ended World War I. Among the honorable guests for this ceremony were the Minister of the Armed Forces and His Excellency Australian Ambassador Brendan Berne.

Hurtaud is active as recording artist. The Naxos record label asked him to record Hindemith’s cello works. He recorded this album with his wife, concert pianist Paméla Hurtado. Their album has been heard millions of times in the Naxos playlist. Sébastien also recorded “Rose de Jéricho” by Youli Galperine at Salle Cortot in Paris, an album inspired by Russian poetry themes, which was mentioned in Strad Magazine’s "a week in my life".

Sébastien was interviewed and featured in a documentary by Anna Cottrell, the journalist and prolific documentary film maker, in Wellington, New Zealands, as well as during the Laon Festival in France. This documentary was broadcast to millions of New Zealanders.

Three-time time Grammy Award winner, producer Rob Griffin, collaborated with Sébastien Hurtaud to record two pieces written by French composer Grégoire Igert, who dedicated both compositions to Sébastien. Both of these compositions are inspired by the Emberas Indian culture and were premiered at Panama City by the French cellist during the 2019 World Youth Days and the 2018 Alfredo de St. Malo Festival.

Sébastien received concert diplomas from the Schola Cantorum and the National Conservatory of Music in Paris, the Royal Northern College of Music in Manchester, UK and Southern Methodist University in Texas. Sébastien’s performance style is influenced by the cello school of Maurice Maréchal and André Navarra, via Erwan Fauré and Jean-Marie Gamard, as well as by the Russian cello school of legendary Karine Georgian. He also studied with renown American cellist and teacher Andres Diaz. For two years after his graduation, Sébastien performed as principal cellist with Opera Demunt in Brussels, mainly in productions directed by Julian Reynolds and Mark Wiggelworth.

Sébastien is the artistic director of the non-profit organization "O.G.L.O." which supports the development of Classical music and the commissioning of new music. In addition to being a performer, Sébastien is also a teacher and gives master classes regularly.

During the pandemic of 2020, Sébastien performed the world premiere of pieces written by American composers Scott Ordway and Steve Heitzeg, as well as Christopher Marshall, a composer from New Zealand.